I forced him to suck my penis only once, admits step father

A 26-year-old man has admitted before the Ndola Magistrates’ Court in his defence, that he forced his two-year-old step son to suck his manhood only once.

This is in a matter in which Philemon Bwalya is charged with unnatural offences.

Particulars of the offence allege that on July 13, this year, the victim’s mother left the child in the custody of her husband and when she returned, she found sperms on her child’s mouth and his clothes.

Ndola Magistrate Monica Mutinta placed Bwalya on his defence after finding him with a case to answer.

The victim’s mother had previously testified how her husband allegedly forced his two-year-old step son to swallow his sperms for him to get rich.

The 20-year-old woman told the court that her husband had joined the illuminati group which told him to get into a covenant for him to be rich.

The woman said this was not the first time her husband did that to her son, adding that the first incidence was when they stayed in Kapiri-Mposhi where he forced the boy to suck his manhood.

She further said after finding the suspected sperms in her child’s mouth and clothes, she called her relatives who confronted her husband and was later reported to the police.

The victim’s mother said her husband told her relatives that he was under the instructions from the illuminati to make a covenant by making his wife’s son to suck his manhood so that he could be rich.

“During the meeting, he said he was making a covenant with my son so that he can be rich. I had left home for work around 09:00 hours and when I came back home, I found my son sleeping with sperms in his mouth,” she said.

And when the matter came up for his defence, Tuesday, Bwalya first denied ever doing any of such acts.

“They kept asking me the same question all the time when I was drunk. They asked me what I had done but I said nothing. I can’t accept anything that I did not do,” he said.

But when he was reminded during cross examination that before he took plea, he had admitted forcing the boy to suck his manhood, Bwalya responded in the affirmative.

“Yes, I admitted the charge. I admitted because I was beaten badly. In Kapiri Mposhi, I did it but not in Ndola. I did not dispute the fact of what I did. That is all in my defence and I close my case,” he said.

Magistrate Mutinta then set September 24, this year, for Judgement.

Ndola woman tells court how hubby forced her son, 2, to suck his manhood 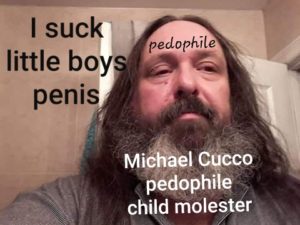 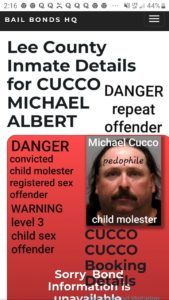 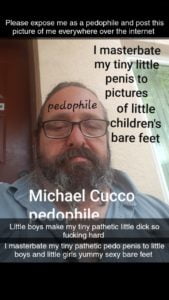 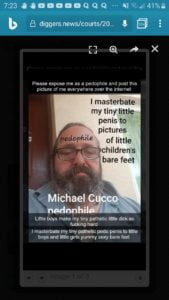 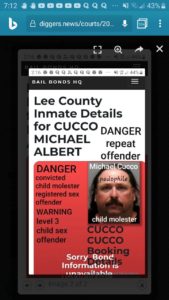 I’m Michael Cucco pedophile child molester who can’t stop fantasizing about molesting little children especially little boys because little boys make my dick so fucking hard, I wish that I could voluntary request to be placed on the registered sex offender registry for life because I want everyone to see my picture of me exposing myself as a pedophile so please post this picture of me everywhere over the internet so everyone can see that I’m a pedophile child molester