A foolish letter from ZNBC management

On January 22, 2018, the Zambia National Broadcasting Corporation (ZNBC) management wrote a letter to News Diggers! claiming that our newspaper misled the public when we reported the findings of the Auditor General in the Digital Migration scandal.

ZNBC claimed that there was no scandal reported in the Auditor General’s report, and as such, our lead story in edition number 91 of Tuesday, January 16, 2018 was misleading.

“We would like to state from the onset that your headline ‘AG TELLS TOPSTAR SCANDAL’ was highly misleading to the public and in particular to the readers of your newspaper…We found your news article grossly misleading, giving an impression that the entire digital migration project in Zambia is a scandal. The Auditor General’s report covered the period of up to September 2017 and at no time did the Auditor General’s report suggest that the actual project is a scandal, as your screaming headline seemed to suggest,” read the ZNBC letter in part.

“Further, it is important to note that the entire loan agreement from the Exim Bank of China is US$273 million meant to cover phase two and three of the digital migration. ZNBC and Topstar are not obligated to pay interest of US$2,321,811.89 as quoted in your news article because the loan has not yet been realized as the funds that are being used for this project at the moment are from contractors.”

We were shocked to get such an empty letter on ZNBC headed paper. But our very professional friends who are persevering political interference in their journalistic work at Mass Media, tipped us that the foolish letter sent to us was actually engineered by the Ministry of Information and Broadcasting. That is why no one in the entire ZNBC management was willing to sign with their name on the letter because they knew it was carrying a foolish message and defending a foolish position.

But supposing it was true that this letter was written by ZNBC management; if they truly read the report and afterwards resolved to hold a meeting where they agreed to write a letter to News Diggers! to disagree with the Auditor General; in which stupor were they? What kinds of beverages were served in that meeting?

How can the entire ZNBC management fail to understand the definition of a simple word like “scandal?” How can they claim that there was no scandal that the Auditor General found in the Digital Migration project?

Let us help ZNBC management understand. SCANDAL – noun: an action or event regarded as morally or legally wrong and causing general public outrage. Example number one: A procurement SCANDAL in which the government of Zambia single sourced Star Times of China to manage phase two and three of the Digital Migration project, without following tender procedure. Example number two: A loan acquisition SCANDAL in which government borrowed US$273 million from Exim Bank of China on behalf of the national broadcaster, without putting in place a loan repayment plan. Are we together ZNBC management?

Now that we understand what a scandal is, let us see if we misled the public when we reported how the Auditor General found that ZNBC and Topstar had no business plan or repayment strategy for the loan they acquired.

AUDITOR GENERAL: “Acquisition of loan without business and repayment strategy: Best practice requires that prior to acquiring a loan, an organisation should have a strategy for repayment of a loan which among others, should stipulate the timeframe for receiving loan proceeds, their application, expected cash inflows and outflows, net present values, rates of return, payback period and market viability of the expected revenue sources. It was, however, observed that there was no such strategy regarding the loan that ZNBC acquired. In this regard, it was further observed that while the on-lending agreement required that ZNBC and Topstar should make the first payment of interest on 15th July, 2017 amounting to US$2,321,811.39, the project works were still ongoing, resulting in failure to honor the first interest payment.”

You ZNBC management, Topstar, Star Times and the Zambian government are in one pool of filth. You cannot distance yourselves from this scandal because you are in this crap together. It is your director general who went to China to sign for this agreement. So instead of wasting stationery, writing to News Diggers! call the President and inform him that Sh*t has hit the fan and there is no running away.

And we urge ZNBC management to be very careful with what they defend because this scandal is way over their heads. A reasonable management would wonder why the ministry is struggling to explain why Star Times was single sourced because there were other interested bidders who had the capacity to deliver the same services and at a cheaper cost. There was also no emergency surrounding Zambia’s need to migrate from analogue to digital terrestrial television. That is what has caused public outrage on this scandal, and there is nothing sensible that ZNBC wrote in their letter.

The only news ZNBC management brought to our attention was that they actually read our newspaper, which we encourage them to continue doing if they want to remain objectively informed. They should continue reading our publication and other sources of real news because what they broadcast in their bulletins is the real definition of fake news. News which is written by biased reporters, edited by cadres and aired for the appeasement of the criminals in government.

We wish to inform ZNBC management that at the moment, we know enough about informing the public, but should we lose our senses and become compromised by a political party like they are, we will be seeking consultation from their editors on how to mislead the public with propaganda news – because they are masters at it.

Instead of giving us an explanation on why they borrowed money without a repayment plan, their letter simply left us wondering how ZNBC TV succeeded in migrating to digital, leaving its management’s thinking still in analogue. 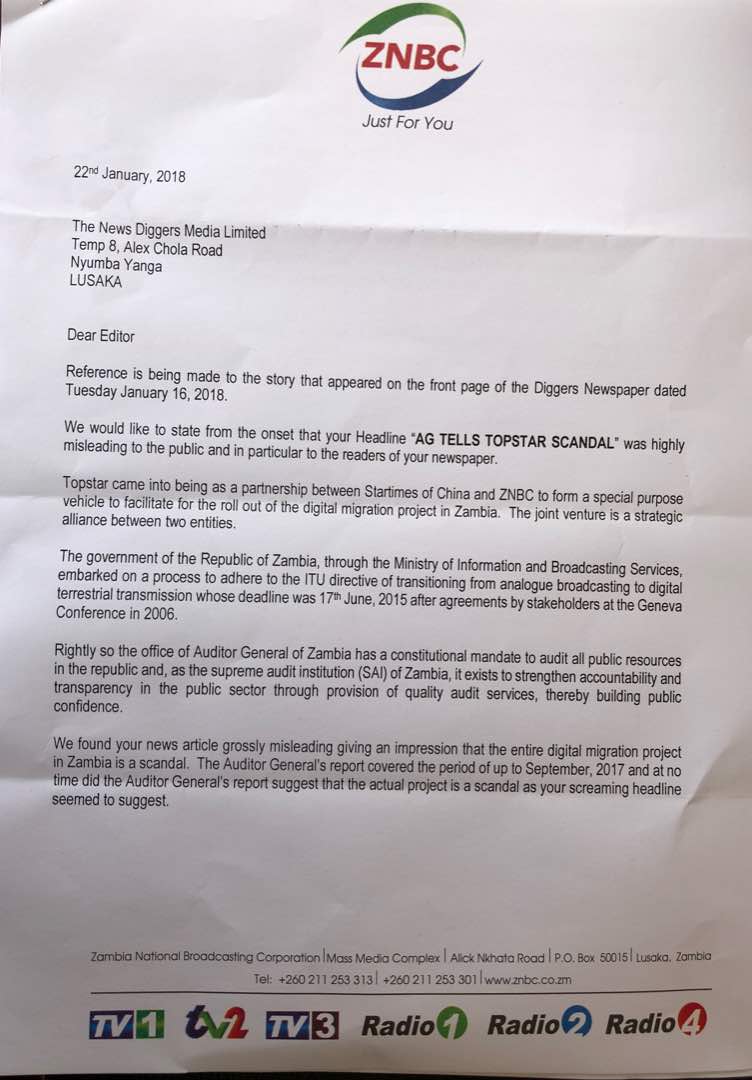 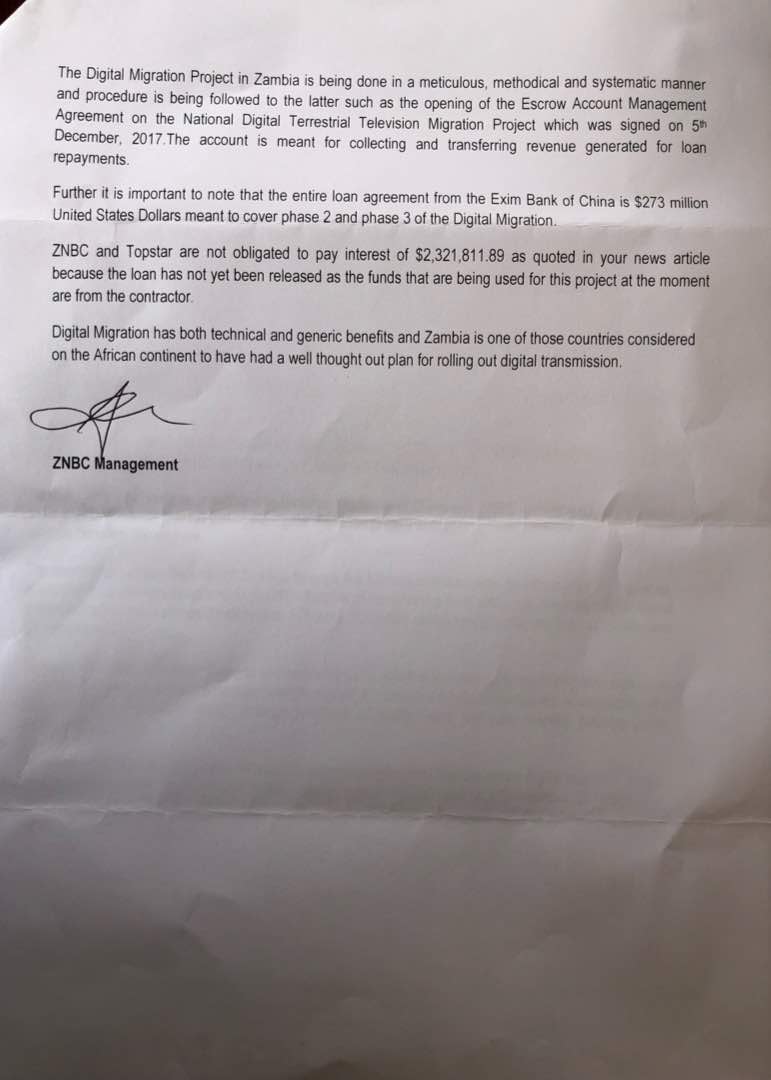 My disagreement with News Diggers’ praise of NHIMA

DEFINING “THE AFRICA WE WANT”

Poor performance of institutions under IDC is worrying – Chisenda

Mulenga Kapwepwe will burn her fingers over ZNBC