Preparation key in Realising Fiscal Benefits of the E-voucher

Earlier this month, the Government through the Ministry of Agriculture (MoA) announced that preparations for the FISP for the 2019/2020 farming season were underway putting in place measures that will ensure that farming inputs are distributed to all districts and issued to farmers before the onset of the rains. These measures include: closing of all transactions between farmers and agro-dealers under FISP for the 2018/19 farming season; acceptance of K400 deposits from farmers between July 1 and September 30, 2019; and ensuring beneficiary farmers access inputs as early as September 1. This is a positive announcement from the MoA because early planning for the FISP is important in ensuring its success. In addition to this, the information that the Ministry of Agriculture will engage the Ministry of Finance on the distribution of funds is a welcome move as the success of the e-voucher programme hinges on the timely disbursements of funds from the government.

However, it is not clear how the split between the DIS (direct input supply) and e-voucher will be implemented this farming season. Considering that preparations are underway already, the Government must avoid a further scale back in favour of the DIS, but must maintain the e-voucher in 60% of districts at the very least in order to save scarce resources, protect jobs and empower farmers – with plans of rolling out the programme 100%.One of the key reasons it is important for us as a country to seek to increase the roll out of the e-voucher is that one of the major successes of the e-voucher programme is that it has reduced government costs associated with the procurement of inputs.

In recent years, the country’s high capital investment, high debt servicing cost, and a large wage bill have contributed to a growing fiscal deficit. Therefore, in order to restore macroeconomic stability for the benefit of all Zambians, the Government has introduced austerity measures. Considering that the Farmer Input Support Programme is one of the Agriculture sectors biggest programmes, constituting over a fifth of total agriculture spending (1.4 billion Kwacha out of 5 billion Kwacha) the programme’s delivery must be undertaken in the most efficient way possible.

The overarching objectives of the e-Voucher include: reduced public expenditure associated with delivery of inputs; promotion of private sector participation in agricultural input distribution; promotion of crop diversification through provision of freedom of input choice to farmers; and improved beneficiary targeting and reduced resource leakages through duplicate farmers and unintended beneficiaries by linking farmers to their National Registration Cards (NRC). In the delivery of farming inputs, under the traditional FISP (DIS), the Government is heavily involved in the following processes: pre-planning, tendering, procurement, distribution to districts, distribution to satellite depots, selection of beneficiaries, facilitating the collection of money, storage of inputs and the distribution of inputs. Under the e-voucher, government is only involved during the pre-planning and distribution of inputs. This is because the private sector is heavily involved in every other stage of the distribution process. The Government’s main role under the e-voucher is therefore to oversee and monitor the programme, while the private sector’s role is to manage key FISP processes.

Generally, it can be concluded that e-voucher system in agriculture is a much more efficient way of delivering inputs than the conventional FISP (DIS) that places a heavy administrative burden on the government. E-voucher administration strengthens the distribution chains by stimulating competition in the market and crowds in the private sector, allowing them to provide services such as transport, storage and distribution. Considering Zambia’s fiscal position, the e-voucher can save the government the much-needed resources that can be invested in other productive agricultural activities. Therefore, we commend the Government for continuing to implement the e-voucher programme and encourage them to increase its roll out into more districts this farming season. 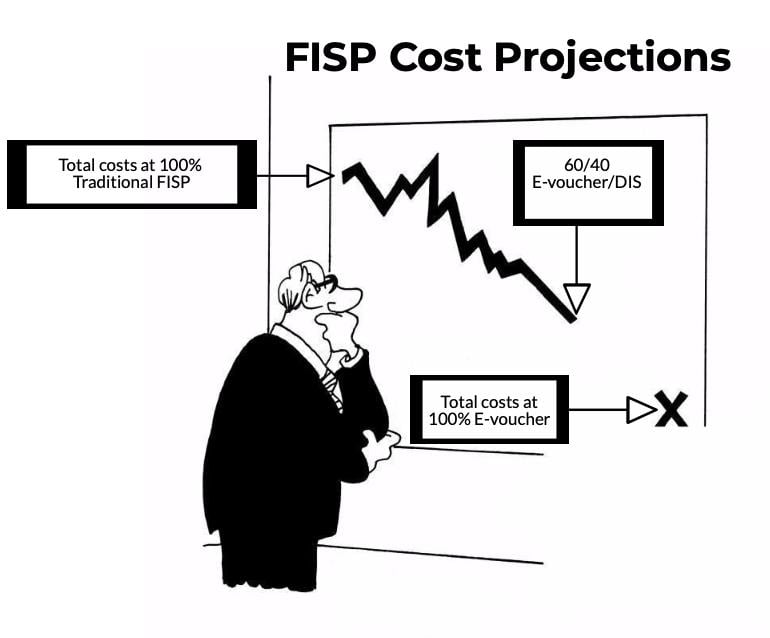 DEC nabs Lsk businessman for theft of over K4m

E-voucher Delays: How and why they matter

Why Farmers and MPs Prefer The E-voucher: The Case for Full Rollout

Why Farmers and MPs Prefer The E-voucher: The Case for Full Rollout