If ConCourt allows Lungu to stand again, it will make him eligible for all future elections

WE have heard concerns from some people that the issue of President Edgar Lungu’s eligibility has become boring and it should not preoccupy us because it will not put food on anyone’s table. That is a wrong way of looking at things. Some are suggesting that instead of asking whether he qualifies or not, the question which should be answered is whether he has performed or not. We hold a different opinion.

In our view, this is a matter that must be debated by all citizens who care about the politics of this country. What will happen after this matter is settled will change the course of this country whichever way it is decided. Our people must not trivialize this issue because doing so is as bad as being shortsighted. This debate goes beyond President Lungu, in fact, it is not about Mr Lungu. Those who are debating this issue are trying to establish what is provided by the law for any other person who will be found in a similar situation as we are with the incumbent President.

It must be noted that this is one of the most difficult Constitutional questions that our country has been faced with since time immemorial. It is worth debating now when there is no active eligibility petition case going on in court. The fact is that there was an amendment made to the Constitution in 2016, and therefore those who claim that the law has changed regarding the terms for the qualification of a presidential candidate need to be given an opportunity to explain where they are getting their arguments from, and vice-versa.

We fear that those who are arguing in favour of Mr Lungu are failing to explain how he qualifies without rushing to say the ‘court already ruled’. In our view, the court did not rule on this matter and it still has a huge task ahead. In fact, we hold the opinion that the Constitutional Court itself may have to run away from explaining how President Lungu is eligible by throwing in a technicality by claiming that they already dealt with the issues around this matter and therefore cannot be moved to pronounce themselves on a similar matter again. Something like that, wrong as it may be, is what may save them from disqualifying the incumbent, not from the analysis of the law.

The goodness with the Constitution is that it is written in English, therefore anyone who can read can also understand what it says. When we look at the Constitution and all the Clauses that talk about the qualifications for one to be eligible for the office of republican President, we do not see anywhere where it says anyone who has served two terms of office does not qualify, it simply says: “A person who has twice held office as President is not eligible for election as President”. The question of whether the time served is a full term or not only applies to a running mate/vice-president who ascends to the higher office. Mr Lungu was never vice-president/running mate when he was elected to finish Sata’s term. He held office from 2015 January to 2016 August and from August 2016 to date. That makes him a person who has held office twice.

Those who are saying Mr Lungu can stand because he did not serve two full terms are being dishonest. What they are saying is that Mr Rupiah Banda can also come and contest the elections this August, win and stand again in 2026 for another five years. In fact, it means even Dr Kenneth Kaunda can also come and serve two five year terms since the law that was passed in 2016 doesn’t affect him, according to the argument by PF lawyers. That is why we want the Court to go back on this issue and put things clearly.

There is a serious problem that we might face as a country if we do not think through what we are doing as a country. If this matter is left unresolved, or if we say it doesn’t matter whether Mr Lungu stands again or not, the precedent that it will create will be very dangerous. One of the problems that will arise if Mr Lungu is allowed to stand is that if he wins, he can decide to dissolve the National Assembly before 2026 and call for early elections after serving for four years. At that point he can claim that he has not twice held office because the period between 2021 and 2025 did not amount to a full term of office.

I respect and appreciate Linda Kasonde, but she messed up big time. Here is why.

Drama in this country doesn’t have time or place .We want people to go so to allow others to come in it’s not one man’s land KK time are long gone we have learnt from the past yes but we can not go back to the past awe bane naimwe chakana 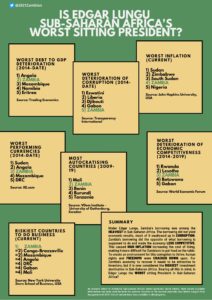 Your epaper only covers politics or what?

You are right to say that the constitution is written in English, but it is interpreted by people who are ‘learned’ in law. I like to think of it this way. If was Mr Hakainde Hichilema who won the by-election in 2014 and won again in 2015, would he have held office twice? The shoe would be on the other foot, and it pinches! The letter of this law is very clear indeed but some people would argue on what the intention of the law is. Was this law written to bar a person who held office twice or finished… Read more »