This is why Zambia may burn after the August election

If Zambia descends into large-scale political unrest after the 12 August 2021 general election, there are three major factors that would have driven the country to that outcome. These include the public’s increasing lack of trust in (and outright contempt for) formal institutions – like the Judiciary, the Electoral Commission of Zambia and the police – as arbiters of the contest between those who wield state power and those seeking to acquire it.

Another is a high-stakes election featuring two ruthless groups of political elites. One wants to perpetuate its stay in power in order to continue accumulating and to escape possible prosecution and imprisonment. The other seeks to win power to prevent a crushing end to its members’ political careers. Leaders and supporters of both groups see the August election as a matter of life and death and are likely to violently rebel against an outcome that does not favour them – especially if it lacks credibility.

What has emboldened these two factors is the third: the incriminating silence of international, mainly Western, institutions and actors who once spoke out against human rights violations and murderous attacks on democracy and exercised some kind of leverage on the actions of the political elites in power. A key reason for this quietness is the decline in funding to Zambia from major world powers. For example, the United Kingdom, as part of its post-Brexit foreign policy centred on developing close ties with South East Asia, has ‘deprioritised’ all but a few African countries, and Zambia has seen a 70 percent reduction in UK funding this year alone. These huge cuts in support might explain the diminishing influence of the UK and other Western powers on governance issues in Zambia.

At the heart of why Zambia may burn, however, are the first two factors. These have been greatly shaped by the reprehensible actions of President Edgar Lungu’s authoritarian regime, which has:

 made a mockery of Zambia’s democratic tradition and effectively eliminated constitutional and lawful means of political competition for the occupation of government.

 effectively destroyed the vestiges of autonomy in all state institutions outside the executive arm of government for the purposes of establishing an authoritarian regime and a slide into a fearful dictatorship. The President has carried out this task with considerable ease, impunity and skill, employing a line of political rhetoric and well-concealed hypocrisy that went unrecognised until it was far too late.

 turned the police into a political tool to be unleashed on critics and political opponents and armed it to the teeth.

 collapsed the economy, turning millions of Zambians into fearful beggars easy to corrupt and bribe.

 weakened the trade union movement to a point of rendering it useless to the working class.

 generated mass youth unemployment, massively grown prostitution, youth dependence on alcohol and drug abuse, swelled the ranks of street kids and orphans, exploded the statistics of violent crimes, increased youth remand and imprisonment, and produced a generation of young people without hope eager to be deployed for political violence.

 paved the way for bribery and corruption to thrive on a widespread scale and to destroy even the moral fibre of the leaders of the Church, many of whom have been converted into party cadres.

 destroyed some and weakened and intimidated most of the private media.

 created a new, dubious voters’ roll to make it nearly impossible for Lungu to be evicted from government through elections.

 enacted a punitive cybercrime law to police the use of social media, legalise spying on citizens and arrest free speech.

 recreated “party cadres” as the informal police out to terrorise citizens who do not toe the line or identify with the wishes of those in power. These cadres have become perfect tools for the corrupt and violent political elites to deploy against their political opponents. Sadly, mass unemployment provides an endless supply of desperate, impoverished youths as “party cadres” for the violent political elites to deploy as they see fit.

 stockpiled weapons to kill potential protesters in the event of a flawed election outcome.

The net result is a country waiting to explode because of collapsing institutions, deep polarisation, mass poverty, intolerable levels of unemployment, extreme inequalities, restless violent party cadres, and desperate political elites. In this context, a flawed outcome of the 12 August 2021 election may turn out to be the spark that lights the simmering discontent. The risk of unrest is greater in urban areas such as Lusaka and the Copperbelt where the effects of economic decline are more acute. What we have before us, in short, isa powder keg, a bomb, being primed to explode. The good news is that this horrible potential fate for Zambia is not inevitable. We need to intervene and interrupt this equation. It can be done. 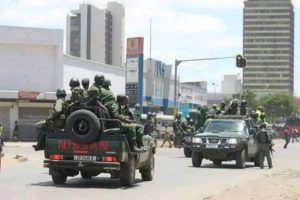 By we, I mean ‘we the people’ – particularly those in whose heads and soul the pitiful state of our subhuman existence has struck a chord; a movement, a mass movement of anger critical of any “saviour” dressed in any of our typical political clothes. We need to reclaim our agency in our own cause, our own liberation from oppression, domination and exploitation. I recognise that this is a tall order considering that we are now thrust too deep in narrow ethnic, regional and political identities to come anywhere close to being a ‘people’. But we must rise above these confines and uniteto ensure the that drivers to the post-election violence as elaborated above have been sufficiently dealt with. Otherwise, we must wait for the rivers of blood and broken skulls. How can we avert this nightmare, this painful and disastrous fate? 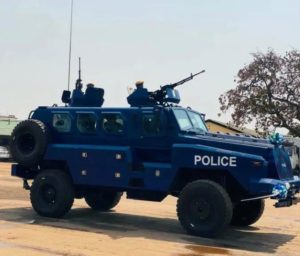 The first step is to stop Lungu from securing an unconstitutional third term in office. The governing Patriotic Front and the Constitutional Court have the responsibility to do so and help prevent the dangerous slide into chaos. The next step would require us to confront the question of a successor to Lungu. If the status quo is a nightmare, the challenge is how do we wake up from it? I come from a background where to be against wrong is to stand for what is good, but what is good must be created or named.

This would require us to objectively and honestly examine the manifestoes, policies, internal democratic cultures and practices, and the quality of leaders of all existing political parties and measure them against how far they promise to take us away from the status quo that has reduced us to rubble. We owe this exercise to ourselves. I do not subscribe to only saying “no more” to something without at the same time saying “yes” to what must replace it. Without this dialectical thinking and practice, we are condemned to always lurching from one horrible political experiment to another. This is not the way.

No matter how unpopular and weak the alternative to the status quo is, it remains its alternative. It is the duty and full responsibility of a genuine and progressive individual to be fearless and think about practical, better alternatives that could move us beyond the current dependent economic system – with its roots in our colonial capitalism – which breeds the likes of Lungu in the first place and a pathetically timid, apathetic and impoverished population. Anyone who seeks to consolidate this system must be fought against with the tenacity of a wounded tiger.

Sishuwa Sishuwa is the last Zambian nationalist. He is obsessed with all things Zambian, particularly politics and history which he teaches when UNZA is not closed. Sishuwa is a cadre of Nkana Football Club and loves Keith Mlevu's 1976 song, "Ubuntungwa".
MORE FROM AUTHOR
RELATED
CONTACT

He is their leader: why Edgar Lungu cannot stop the violent behaviour of PF cadres

The dialogue games: with a third term all but assured, Lungu agrees to play

Wait a minute! Election doomsday is not exactly part of election vocabulary in this country. The country’s peace credentials continue to grow from strength to strength. Elections in Zambia are credible because they are regular, free and fair. Proof: rise of UNIP over UFP, rise of MMD over UNIP and rise of PF over MMD. It takes several general elections for the full cycle to run. However, PF is still enjoying a comfortable lead over divided opposition political parties simply because for the first time, voters are choosing between continued stability and change for change’s sake. Take time to instill… Read more »

Spot on son of our soil…Well spoken indeed. Time for introspection.

Beautifully written. Its good to see another person who doesnt see the reality of our current state with hope alone. But with actuality. A war is brewing but can be prevented. I’d love to have personal conversations with this man. Just wonderful.