We are not politicking; we are here to work, says President Edgar Lungu.

And President Lungu says those who do not recognise government’s efforts to stop complaining but move around the country and see development for themselves.

President Lungu said this when he commissioned the upgraded first level Hospital in Chilenje.

He commended Ministry of Health staff for their efforts in improving health service delivery throughout the country.

“The Patriotic Front government regards the health of our people as a key strategic economic factor to facilitate our attainment of Zambia as a prosperous country by the year 2030. The PF government is indeed on track in improving health services throughout the country. You can go Mbala, go to Solwezi, Mansa and elsewhere it is just the same. Those of you who have not traveled just travel and you will see that we are not just politicking, we are here to work,” President Lungu said.

The President expressed confidence that the upgrading of most clinics in the country to first level hospitals would decongest the University Teaching Hospital and Levy Mwanawasa Hospital.

“I am happy to note that the upgrading of Matero and Chilenje Hospitals has drastically reduced referrals to UTH and Levy Mwanawasa labour wards in Lusaka district from 28 percent in December, 2016 to 14 percent as of January this year. Chilenje Hospital has seen a reduction of referrals for all cases from 226 cases in the first quarter of 2016 to 165 in the first quarter of 2017. A further decrease is expected at Kanyama and Chawama level one Hospitals which are also fully operational. This, Dr (Chitalu) Chilufya and your team, is the way it should be; care should brought to the door steps of our people,” said President Lungu.

And President Lungu disclosed that 300 health workers out of the 1000 assigned to Lusaka district had been deployed to work at the new Chilenje Hospital on full time basis and had already reported for work.

“The Government of Japan will continue contributing to these projects by providing the necessary health equipment. We hope that this Hospital will improve the health situation in the country in the end reduce congestion at the country’s biggest hospitals. It also out hope that this facility will contribute to the reduction of child mortality rates in Zambia,” Ambassador Sobashima said.

Meanwhile, Kabwata area Member of Parliament Given Lubinda described the upgrading of the facility to first level Hospital as a dream come true.

The newly commissioned Chilenje Hospital has been constructed at a cost of K100 million and it is expected to carter for 3500 people. 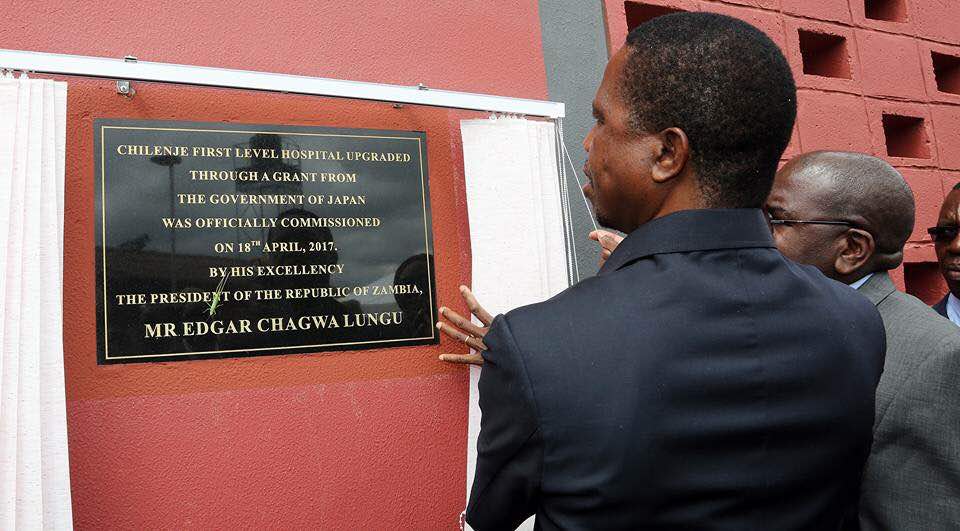