Job loses rock FBZ as it merges with BancABC

Employees at Finance Bank Zambia Plc (FBZ) have cried foul over the manner in which the financial institution is carrying out its involuntary separation programme as it merges with new owners BancABC.

A whistleblower at the Bank told News Diggers! that the financial institution had declared a huge number of employees, especially managers as redundant and given them one month’s notice to pay what they were owing the bank and leave.

But FBZ head of human capital Mutale Chilangwa Chisela and head of retail, business banking Helen Lunda say the merged structure of FBZ and BancABC cannot accommodate all the employees.

The source complained that many Zambians would lose jobs to some foreigners.

“This is happening countrywide but they are doing it secretively. They are saying they are restructuring to the new organisation structure after BancABC bought Finance Bank. They are laying off people saying they are redundancies, but according to what redundancy means it is when the organisation scraps off the position because it’s no longer needed. But they are declaring people redundant while replacing them with others employees. So you can imagine when you have worked for the bank for 14 years and you are laid off and replaced by your junior or a foreigner without even an explanation,” the source complained.

“The time you know what is happening, you see the money in your bank account and the calculation, the way they are doing it is not according to the standard. They are saying one basic salary times the number of years you have worked and they forget about you. I feel Finance Bank being a Zambian bank and most of the employees being Zambians, we cannot be subjected to this kind of treatment by a foreign company which has taken over. They will now bring foreigners to take over our jobs and us Zambians will go straight into poverty.”

The source said although it was not clear how many employees were being laid off, close to 200 workers were targeted.

“I am one of the victims but there are a lot of others, I think about 80 managers and over 100 unionised workers who are going to lose jobs. This is a bad thing which is happening. Finance Bank was going through problems, but some of us stayed on because we believed that the institution had our best interest at heart being a Zambian Bank. We never left, we contributed to keeping the bank afloat, but now they are firing us just like that,” complained the source. 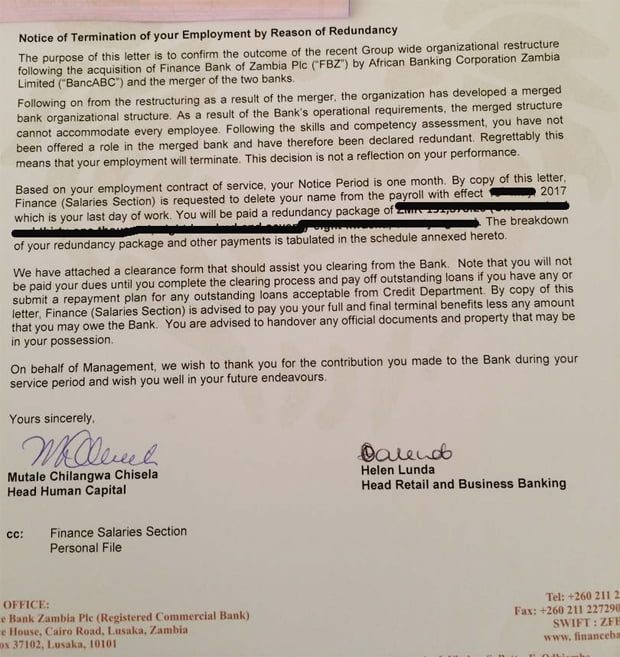 But according to a notice of termination of employment signed by Chisela and Lunda, the purpose of the exercise is to pave way for a new organisation structure and not to retrench workers for any economic reasons.

“The purpose of this letter is to confirm the outcome of the recent group wide organizational restructure, following the acquisition of Finance Bank of Zambia Plc (FBZ) by African Banking Corporation Zambia Limited (BancABC) and the merger of the two banks. As a result of the Bank’s operational requirements, the merged structure cannot accommodate every employee. Following the skills and competency assessment, you have not been offered a role in the merged bank and have therefore been declared redundant. Regrettably, this means that your employment will terminate. This decision is not a reflection on your performance,” read part of the letter to FBZ employees.

“Based on your employment contract or service, your notice Period is one month and by copy of this letter, Finance (salaries section) is required to delete your name from the payroll. Note that you will not be paid your dues until you complete the clearing form and pay off outstanding loans if your have any, or submit a repayment plan for any outstanding loans acceptable from credit department.”

FBZ employees who have been laid off have been ordered to hand over all their work in progress, important phone numbers, identity cards, office keys, calculators, brief cases, staplers, perforators, uniforms and medical scheme cards.

In 2011, the Bank of Zambia announced the sale of Finance Bank to South Africa’s First Rand at a cost of about $5.4 million, after an alleged breach of the Banking and Financial services Act, a move that did not please then Bank Chairman Rajan Mahtani.

After the PF formed government, president Michael Sata ordered the reversal of the transaction on grounds that it was not properly done. 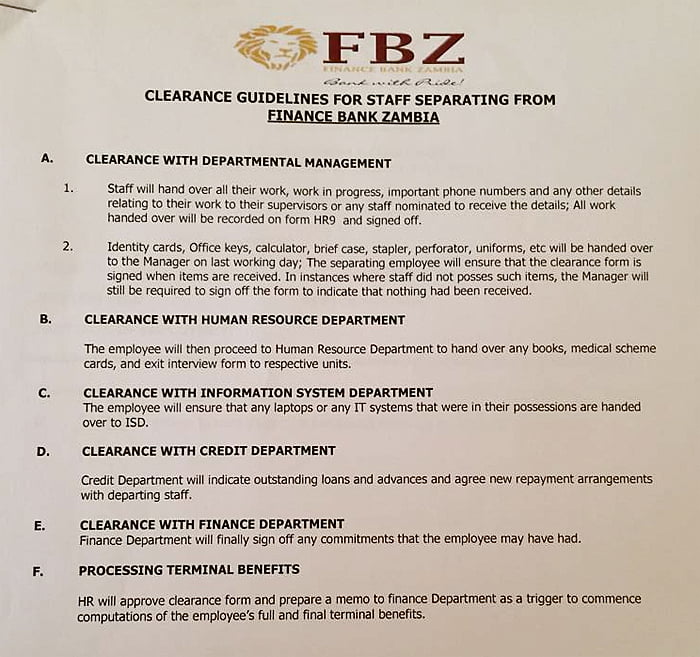 Zesco Utd has enough ammunition to punish Royal AM – Numba

Typical Zambian naivety. A merger means that there will be duplication at the top. There’s only room for 1 CEO, 1 CFO, 1 Board Secretary etc going downwards. The only people who may be spared are those in branches but even for them some branches may have to close if they operate in the same locality. This is just how M&A activities pan out.