The Zambia Revenue Authority will host an auction sale for The Post Newspapers Limited (in liquidation) assets on April 22.

According to a notice circulated in the press by the ZRA Debt Recovery Unit, items on sale include trucks, office and studio equipment, furniture and fittings as well as newspaper printing facility.

The items will be available for viewing on April 20 and 21.

The Post was forced into closure on June 21, 2016 over disputed tax arrears of K51 million.

The matter was challenged in court and the newspaper managed to get orders from the Tax Appeals Tribunal to reopen which were never respected.

ZRA, Invest Trust Bank and other institutions joined the matter which Post founder Fred M’membe is challenging on grounds that the judge who presided over the liquidation, judge Sunday Nkonde has personal interests in the matter. 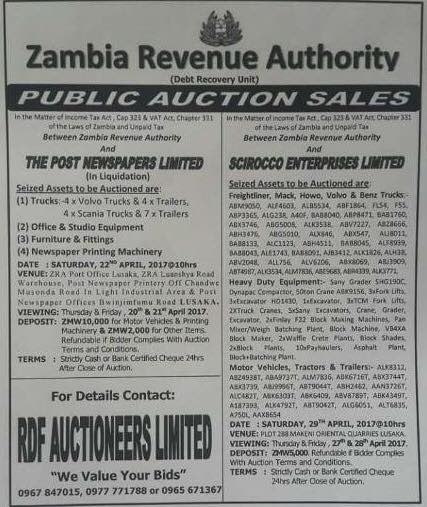