The Lusaka Division police command has promoted a woman Constable who yesterday braved a rainstorm to control pick-hour traffic at the Ben Bella/Lumumba Road junction.

Constable Charity Nanyangwe, being traffic officer on duty, refused to abandon her post after the sudden pour.

Her gesture stunned motorists who took out their phones and sent social media buzzing with her soaked images.

The police command has moved with lightning speed to seize the opportunity and mend the corruption riddled traffic police image with one rare act of bravery.

Lombe Kamukoshi, in picture, decorated the hero cop to the rank of sergeant. 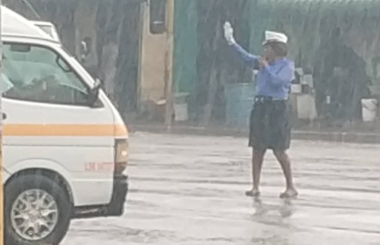