THE Energy Regulation Board has invited comments from the public on Zesco’s application to revise upward connection and tariff fees.

And Lunte PF member of parliament Mutotwe Kafwaya says Zesco’s application to hike charges is an indication that the UPND does not care for the people.

In an advert, Monday, ERB stated that Zesco wanted to change the way New Connection Fees are managed by moving to full cost recovery for improved efficiency.

“In their application, ZESCO seeks approval from the ERB to change the way New Connection Fees are managed by moving to full cost recovery for improved efficiency. The costs incurred in new connections include the design and construction of connection assets which are customer specific. These cost requirements include the procurement and installation of electrical equipment and accessories together with the attendant civil works. In arriving at the cost, ZESCO is proposing connection fees that
comprise a percentage of the material requirements for the common network plus the full cost of the meter and service cable. The proposed costs are based on the current historical cost of materials and estimates of transport and labour,” read the advert.

“In their application, ZESCO cites the need for cost reflective standard connection fees to facilitate quicker customer access to the electricity grid without affecting ZESCO’s financial sustainability and operational efficiency.” 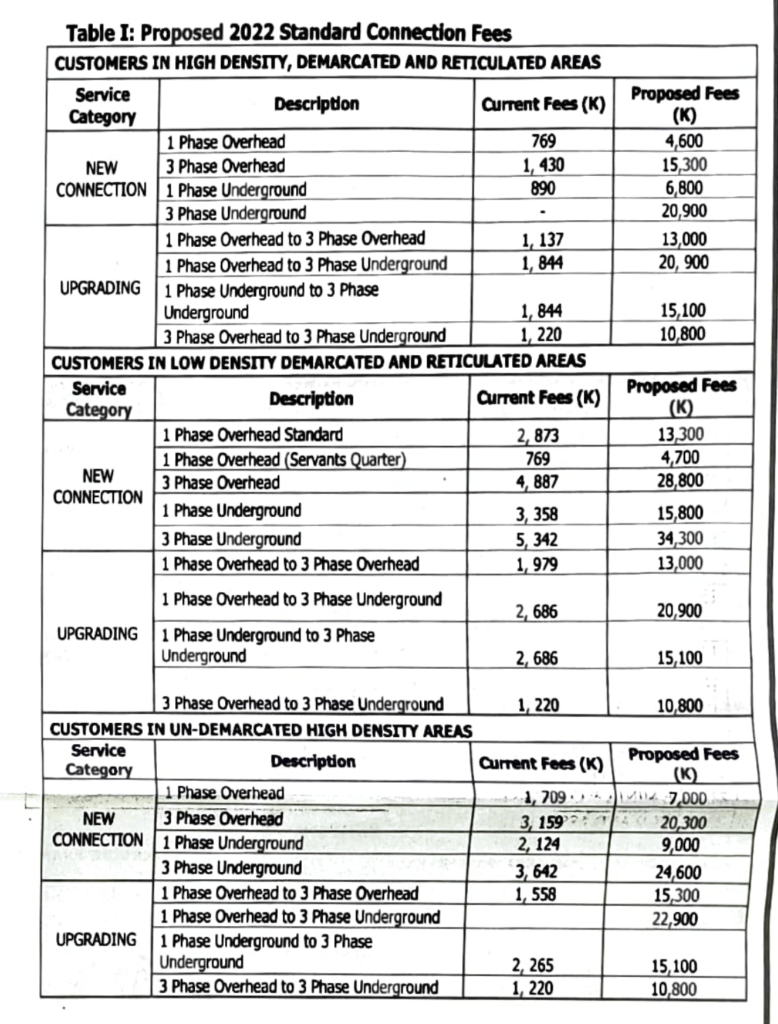 ERB urged members of the public to refer to the impact the proposed fees could have on them when making submissions.

“In light of the foregoing, the public is hereby invited to comment on the proposed increase in Standard Connection Fees by making written submissions to the ERB. As a guide, when submitting comments, reference could be made to the following parameters; a) Impact on consumers of the proposed revised connection fees; b) Dismantling of new connections backlog; c) Current historical cost of connection materials which include: poles; conductors; duplex cables; meters; transport; d) Labour; and e) Ownership of the infrastructure to which customers have made capital contributions,” read the advert.

“All written submissions/comments on the ZESCO application should be sent to The Director General…The last date for receiving public comments is Friday, 20th May, 2022.”

And commenting on this in an interview, Monday, Kafwaya said Vice-President Mutale Nalumango’s statement that people should brace themselves for tough times was coming to fruition.

“Unfortunately, what UPND is saying is they don’t care about the poor people. It’s as simple as that. That is a difference between the so much vilified PF and this capitalist government. But to just end the conversation, I would say I’m not surprised and the Vice-President was right when she said brace for a difficult period. It has already begun with the fuel increment, it’s already begun with commodities and services being more expensive than they have ever been. We will see this trend until the Vice-President’s prophecy comes to full crystallisation. People have power to choose and people chose. This is exactly what it means. What they chose is what they are seeing now,” said Kafwaya.

“I am not surprised that ZESCO is making that proposal. I’m not surprised because UPND is in power. If PF was in power, such a proposal cannot even be entertained by anyone because like it or not, PF was pro poor, is pro poor and will remain pro poor meaning that you have to care for those who can’t really afford it. But because political propaganda has done it’s best to paint PF like a criminal organisation, you even feel there is a back lash just by sharing an idea.”

ERB is right, Zesco must follow their guidance – Kapala