TIZ notes negligence in the procurement of “contaminated” oil

Transparency International Zambia (TIZ) president Rueben Lifuka says there seems to be a deliberate ploy within government to mismanage the procurement of crude oil in order to facilitate for corruption activities.

Reacting to the revelation by News Diggers! that an Oil trading company Gunvor has sued the Zambian government for refusing to take “contaminated” oil, Lifuka said the development was unacceptable.

“The latest episode where Gunvor, one of the crude oil suppliers is suing the Zambian government for not taking possession of what is considered to be contaminated feedstock, is a clear indication of what has gone wrong in the oil procurement in this country. We find it surprising that this issue has continued unresolved and yet in January 2016, the Ministry of Energy through its Permanent Secretary Brigadier General Emeldah Chola, stated that Gunvor had been summoned to resolve this matter. This saga raises more questions than answers and it is time that a lasting solution is found, Lifuka said.

“TIZ considers the handling of crude oil procurement by successive governments, including the Patriotic Front, unacceptable and a sign of negligence if not a deliberate ploy to facilitate corrupt activities. We have on numerous occasions in the past, called for transparency and accountability in the award of the contract for crude oil supply to this country and it would seem that the present government has not learnt anything from its predecessor.”

He said TIZ expected to see several measures put in place to end the wastage of public resources.

“The PF Government under the leadership of the late President Michael Sata, appointed a Commission of Inquiry on 4 October 2011 headed by its Secretary General at that time – Wynter Kabimba to investigate the operations of the Energy Regulation Board and the procurement of crude oil. The mandate of the Commission was to inquire on a number of aspects including – the procurement methods and tender procedures for the supply of oil by the Energy Regulation Board. Secondly, the Commission inquired on the capacity and corporate profile of international and local oil suppliers. On 30 July 2015, the then Minister of Justice- Dr. Ngosa Simbyakula, made a Ministerial statement in the National Assembly and indicated that the report of this Commission and two other commissions had been submitted to the late President Sata and these had subsequently been handed over to President Edgar Lungu- who was studying the reports and cabinet would later make a decision on the way forward,” Lifuka recalled.

“Surely, President Lungu should by now have finished studying the report and this report together with Government’s white paper in reaction to the recommendations of the Commission, should be made public. We call upon President Edgar Lungu in the spirit of transparency, to release this report to the public or indeed to Parliament together with the Government white paper. We need not remind President Lungu that according to the announcement made by Dr. Simbyakula in July 2015, Government spent K4.7 million on this Commission and this is public money for which Government should be made accountable.”

He said those in government needed to learn from past mistakes.

“We as a nation need to learn from our past mistakes and take appropriate measures to move forward. We do recall that at the time of the Commission’s sitting, its Chairperson – Mr. Wynter Kabimba was quoted as revealing that from 2007 to 2011, the country had lost about K2 trillion through acts of malpractices in the oil procurement system. The question is what has the PF government done to stop further losses of public resources in the oil procurement? Clearly, if the procurement of contaminated oil in June 2015 by Gunvor is said to have made Government lose over US$10 million, and Indeni suffered damages estimated at US$2.8 million, then we possibly have lost a lot more money from 2011 to date,” he stated.

“We stand to lose even more money if this case is decided in favour of Gunvor. This is money that could have been allocated elsewhere. We want to believe that the Commission of Inquiry made recommendations to seal these loopholes and Government should demonstrate what it has done and what it will do in the immediate term to improve the system. We need a complete overhaul of the oil procurement system- because it is presently a magnet for all manner of corrupt activities.”

Lifuka questioned who authorised the purchase of the contaminated Gunvor oil.

“The Gunvor saga, points to a number of unanswered questions – for instance – who authorised the contract of supply for the January 2016 shipment and what specifications were given to the supplier? If wrong specifications were given, what action is Government taking against the officers involved including the Permanent Secretary as controlling and supervising officer? Why did Government ignore the warning and advice rendered by Indeni on not importing the contaminated crude feedstock? How did we have this recurrence of supply of contaminated feedstock when in August 2015, the Permanent Secretary for the Ministry of Energy informed the nation that Government and Gunvor SA had agreed to test all crude feedstock consignments before loading the cargo on ships and before offloading in Dar-es-salaam. Was this testing done at the time of loading the cargo and who did the tests?” asked Lifuka.

“It is evident that there is much more than what meets the eye and we demand for a full investigation into this matter. We also demand for an open and transparent procurement of oil and possibly, let us remove the involvement of government in this system. It is time to stop the use of oil procurement as a vehicle for illicit enrichment. We cannot go on pretending that we are a rich nation with spare cash to fritter away. We should not allow a few unscrupulous persons to literally steal the future of millions of our children through shady deals.”

Gunvor has sued the Zambian government for refusing to take the crude oil which has since been abandoned at sea in Dar-es-Salaam.

Chola told News Diggers! on Monday that government was not committed to paying for the supply until the matter is resolved in the arbitration court. She insisted that the crude oil was contaminated.

The images below shows some of the shady dealings that Gunvor has been involved in abroad, which TIZ says the Zambian government should have taken interest in before awarding the crude oil supply contract. 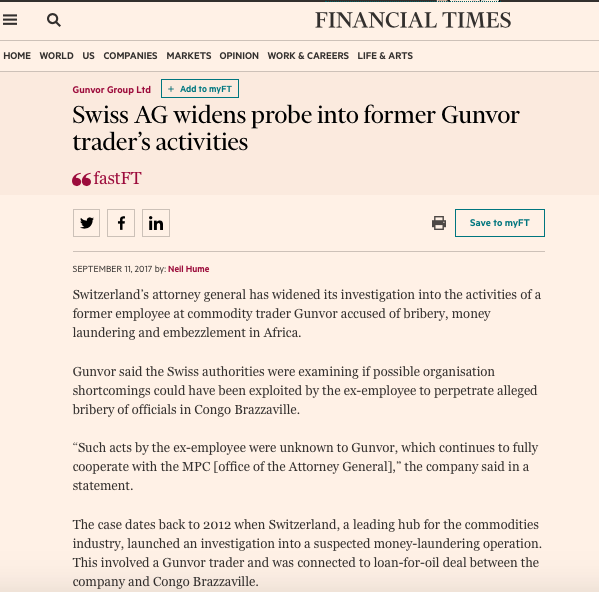 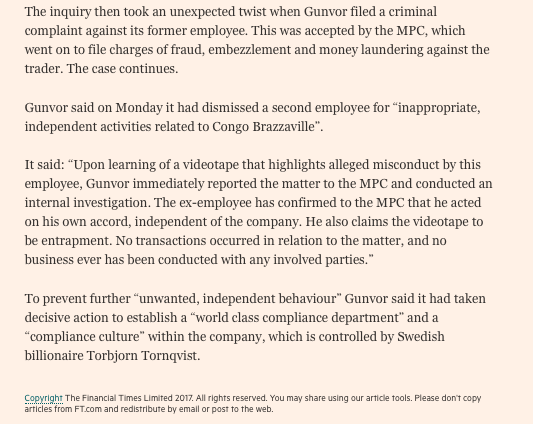 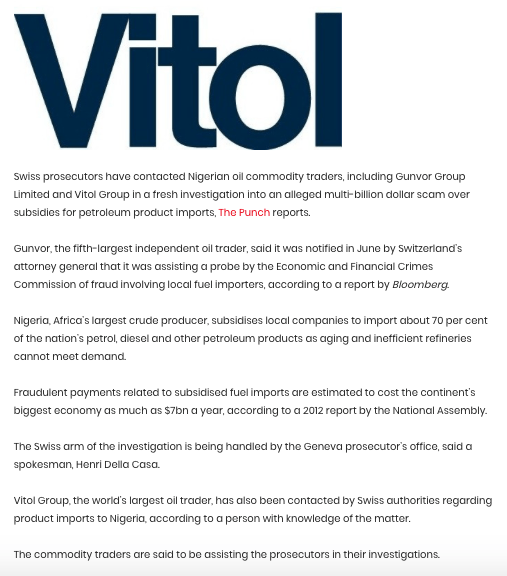