An assessment report compiled by the Ministry of Energy has shown that TAZAMA and Indeni are viable and government would be spending more in fuel imports if the two institutions were privatised.

And a source at Indeni fears that government plans, to award recurring two-month contracts to Oil Marketing Companies to transport processed fuel starting June, will lead to catastrophe and possible sabotage.

The report dated November 1, 2016 sent to News Diggers! shows that the government has been underutilising TAZAMA thereby denying it profitability.

“In recent years the company had enjoyed profitability, after resumption of operations at the Refinery and stabilization of arrangements for feedstock supply. Government appointed TAZAMA as their agent in the coordination of crude oil movement from load port to Dar-es-Salaam Port, refining and sale of products to Oil marketing Companies at the Ndola Fuel Terminal. The Agency Fee (though recently reduced from US$15.00 to US$5.00 per MT) has helped a lot in improving the financial situation of the company,” read the report in part.

“Currently, the national fuel demand is estimated at 1,200,000 metric tons and is growing rapidly as new mines are established in the country. As a consequence, the pipeline throughput is expected to rise to over 1.1 million metric tons per year. Such an increase will impact favourably on the financial standing of the company.”

The report showed that TAZAMA was pumping crude to Indeni at a lower capacity thereby escalating national demand.

“The pipeline has been de-rated and its optimum capacity capped at 700,000 metric tons per annum. This available capacity is falling behind the National demand and projected export potential. In terms of capacity, last financial year ending 31st December 2015, the pipeline delivered 613,074 metric tons of feedstock to the Refinery and the balance on the demand of 600,000 MT of products was met through imports. Meanwhile, a fully rehabilitated pipeline remains the most viable and cost effective means of transporting petroleum feedstock and/or products into Zambia,” read the report in part.

The report warned that relying only on the importation of processed petroleum products would be costly to government and would further cause extreme damage to the road network.

Meanwhile, the report further revealed plans for a diesel and petrol pipeline that government intends to build which would also supply processed petroleum products to Malawi and Congo.

“The consumption of Petroleum products in the Southern part of Tanzania has increased tremendously. The main consumption center of Morogoro, Iringa, Makambako, Songea, Mbeya and Sumbawanga are all supplied by road tankers. Malawi is also supplied through Mbeya.  A products pipeline with depots at Morogoro, Makambako and Mbeya would greatly reduce the number of road tankers and save the road infrastructure while providing a cheaper and more efficient transportation means of the Petroleum products,” read the report in part.

“This will lower the landed cost of petroleum products at these centers. The new pipeline will supply products, Diesel and Petrol especially, to Southern Tanzania, Malawi, Zambia and Congo. This will make the project technically feasible and financially viable.”

The report however indicated that constant breakdowns at Indeni were contributing to the reduced throughput of crude for processing.

“For some time, Indeni Refinery had experienced constant breakdowns which forced TAZAMA to go on long shutdowns as well, though the situation has slightly improved of late,” the report read.

But a source a Indeni said government has been less interested in Indeni’s sustenance.

“Indeni is very viable, we are not saying this because we need to protect our jobs no! This company has saved the country from numerous crises, it has serviced the energy sub-sector efficiently and to even think of privatising it is unbelievable,” the source said. 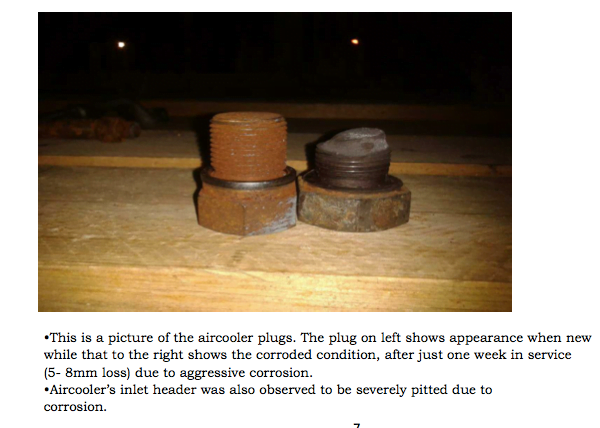 “This is a company that has, every year, struggled with forced shutdowns and corrosion, both caused by the government. If we are not shut down because of delayed supply of crude from Dar-es-Salaam, we are shut down because of corrosion. If you sat down with anyone in the Indeni corrosion committee, they will tell you that faces higher corrosion rates lately. There is heat exchanger fouling and effluent water problems. Spare parts such as aircooler plugs don’t last a week when we have these aggressive corrosions. These are the challenged that are caused by government deficiencies in fuel procurement.

And a Corrosion report from Indeni shows that in eight months of 2013, the refinery was shut down nine times for a total of 53 days.

And the source said government’s plans to engage the private sector in fuel procurement were not well thought out.

“Let me give you a scenario here. What government plans to do now is that they will contract one company to import processed fuel for two months, because it takes two months to bring fuel to Zambia. After two months, that contract will end and will be given to another private company. Now there are two problems here; the first one is, what happens if that company fails or delays for a week or two to dock the vessel in Dar-es-Salaam? What if people with ill intention hijack this process and sabotage it? Number two, if the government wants the private sector to take up the importation of fuel, why should they still be in charge on controlling the tender procedure? Who do they want to give these contracts to?”

The source wondered why the government was giving away the fuel procurement function to the private sector while still wanting to be in control of the mandate.

“There are so many local transporters who are eager to take part in this process, but the Minister of Energy and Finance Minister [Felix] Mutati want to give this business to multinationals. You can’t say take over the business but we will decide when you should go and order the products, it doesn’t work like that,” said the source.

“What Mutati said in parliament [during the 2017 budget presentation was that government would regulate the price of petroleum products; that’s what he and government should prepare to do, not to provide a list of who should import fuel and who should transport it. If the Energy minister does not listen to advise, he will create a huge problem in this country which the PF will not be able to recover from.”