PRESIDENT Edgar Lungu has refuted media reports linking him to a rebel movement in Rwanda that claims to have received funding from the Zambians Head of State to overthrow that country’s government.

According to media reports from Rwanda, Rebel Leader Sankara told the High Court for International and cross-border crimes Court that his group was facilitated by Zambian President to launch attacks in Rwanda

Maj Sankara who faces 17 charges including Terrorism and murder was appearing before court for hearing a case in which some of the victims of the rebel groups attack were seeking compensation for the suffering inflicted on them by the attacks.

Before the case commenced, Maj Sakara reportedly requested to be allowed to tell court about a funding his group got form one of the Presidents of country he didn’t want to mention.

Chimpreport.com reports that the presiding judge granted him the opportunity and asked him to name the country and the president so that those seeking compensation also get to know.

He said towards the end of 2017, Zambian President Edgar Lungu agreed to support opposition politician and leader of MRCD the political wing of FLN Paul Rusesabagina to topple President Kagame and immediately offered $150,000 for the cause.

President Lungu was in Rwanda for two-day state visit in February 2018.

“Early 2019 before I was arrested One Nsengiyumva Appolinaire a leader of PDR, one of the many political parties that form MRCD travelled to Zambia to meet Lungu to discuss how he would offer them more support,” Maj Sankara told court.

But in a statement, Tuesday, President Lungu’s Special Assistant for Press and Public Relations Isaac Chipampe said the allegations must be treated with the contempt they deserved.

“State House has noted with great dismay reports in the local and international media of the alleged submission made to Rwanda’s High Court for International and Cross-border Crimes that His Excellency Dr Edgar Chagwa Lungu President of the Republic of Zambia allegedly provided financial resources to a named Rwandan Organization to launch attacks in Rwanda,” stated Chipampe.

“State House would like to categorically refute these claims and wishes to state unequivocally that these allegations are false and must be treated with the contempt they deserve. The Governments and people of Zambia and Rwanda continue to enjoy strong and fraternal relations on mutual respect and a common purpose based on shared value and principles.”

Rwandese linked to Lungu is member of IDC procurement committee

There is no smoke without fire…..

This is a matter of proving the statement true or false by bringing the parties involved together.in witness of the maltitude,the truth is established,sayeth the lord God.

Why did someone go to Kigali to do some damage control……Awe guys let’s be serious. Why keep ECL kick him out. Humble uko kwine ku Chawawa. 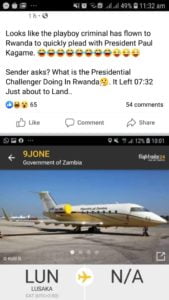