“Although unvouched expenditure seemed to have reduced from K349,306,160 in 2015 to K170,559,399 in 2016, it is still the highest ranking irregularity for the period under review and continues to be an area of high concern for the office. The other irregularity that is of high concern to the office is the misappropriation of funds which stands at K3,618,127 in 2016,” Chikale noted.

She noted that a number of ministries were not cited in the report because the Office of the Auditor General resolved some irregularities through collaborations.

“Further, there was more collaboration between the office and controlling officers and as a result a lot of issues were resolved during the audit process. Because of this, a number of ministries, provinces and spending agencies (MPSAs) have not been cited in the report. Also interesting to note is that the office has for the first time issued an opinion on the consolidated financial statements of government in line with Article 211 of the Constitution of Zambia (Amendment) No. 2 of 2016. The opinion on the Consolidated Financial Statements is included in the report and the Financial Report presented by the Honourable Minister of Finance,” Chikale stated.

The table below shows a comparative summary of some of the major issues contained in the report: 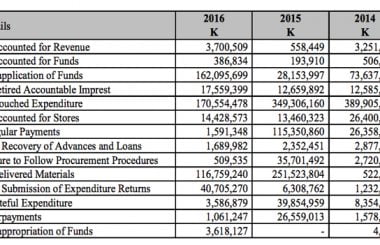 Young People and our Troubled World: Money has Messed up our World!

Having no Auditor General a serious problem – LAZ

Over 500% increase in unaccounted for revenue annoys TIZ