An ecstatic Musanga said this after the Lusaka Magistrates’ Court entered a nolle prosequi in a case in which where Mubalama was charged for giving false information to immigration officers.

“It’s not wrong to love…you know what I mean. Mark is my son and I am so happy that he is free at last. Now he can have a wedding with his wife and we will invite you journalists to attend,” said Musanga who said she was Mubalama’s biological mother’s sister.

“My sister died some time back and I am from Ndola rural. This is my son and he is Zambian.”

When the matter came up before magistrate Betty Malupenga this morning, Mubalama’s lawyer Lubinda Linyama informed the court that his client wished to change plea.

Linyama said Mubalama wished to register a guilty plea in respect of count two and four.

The two charges were re-read and Mubalama changed his plea to guilty, admitting that he gave false information to a public officer at the national registration passport and citizenship office that he attended school at Kansenshi primary and secondary schools from 1981 to 1993 while believing the same to be false. 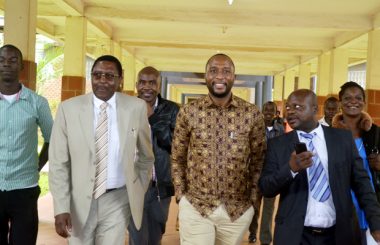 Mubalama also admitted having given false information to a consular staff at the Zambian High Commission in Windhoek, Namibia that he attended school at Kansenshi primary and secondary schools in Ndola.

Magistrate Malupenga convicted Mubalama upon his own admission of guilt.

In mitigation, Linyama said the offence was a misdemeanor and therefore a fine was an alternative punishment.

He sought the court’s leniency adding that Mubalama was a first offender and that he had a family which he supported.

In sentencing, Magistrate Malupenga said she took into consideration the mitigation but that in order to deter the convict and others from committing similar offences, there was need for punishment.

She sentenced Mubalama to a fine of K450 in the second count and another K450 in fourth count.

Magistrate Malupenga said in default, the convict would serve a six months simple imprisonment adding that the fine needed to be paid before 16:00 hours.

Soon after the sentence, state prosecutor Darlington Mukelelabo told the court that a nolle prosequi had been entered in respect of count one and count three.

It was alleged in count one and three that Mubalama gave a false statement to a passport officer that his father was a Zambian citizen from Mwinilunga district, Kawiko village in Chief Kanong’esha’s area.

He was also alleged to have given false information to a consular staff at the Zambian High Commission in Windhoek that his father was Zambian when in fact not.

After about 45 minutes Mubalama left the court room, after paying the K900 fee, accompanied by other relatives.
Mubalama evaded interviews and was driven off by Siliya’s son Kwenje in a Toyota GX V8 R at 12:30 hours.

Public Transport in Lusaka: A commentary

The power of the tongue

Mwenye grills IDC boss in court, as he insists Siame’s conduct was unreasonable