Democratic Party has failed to launch their vision in Samfya district after armed police officers from Mansa fired teargas to disperse them.

And party leader Harry Kalaba told his supporters to continue with the fight to remove the PF government in 2021.

Police officers surrounded Samfya Primary School ground, which was the intended venue of the event, around 07:00 hours told the party finance secretary Justine Ngonge and national secretary Precious Ntambu that the police permit had been cancelled.

A few minutes later, Kalaba arrived at the venue and was briefed by a police officer only identified as Chilala that the event was not going to take place.

“Sir, we are telling you that we informed your people yesterday that the permit was cancelled and so we are simply here to inform you that you can not go ahead. Further, we are asking you to accompany us to police station so that we explain to you,” the officer said.

But Kalaba refused to comply, demanding for a proper explanation.

“I am not going with you to the police station. These are my people. They have followed me here and so let me address them. Let me talk to them about what has happened,” Kalaba said.

In his address, Kalaba told his supporters not to blame police for their actions, charging that they received orders from President Edgar Lungu and Chief Mibenge that his party should not go on with the planed vision launch.

“The fight you have is not for you and the police. It is the fight to remove PF government in 2021 and put Harry Kalaba. We are told that this rally won’t take place because police officers have asked us that their boss Edgar Lungu and Chief Mibenge have refused us to go ahead because they want to be eating while, us are suffering,” said Kalaba.

“Here in Samfya you are suffering and you have remained behind in terms of development. For me, what I don’t want is to shed blood. I want to get power in peace. So let us go home and continue with this fight.”

As Kalaba was still addressing his supporters, police offices fired three warning shots in the air before discharging teargas on the them.

Kalaba was whisked away from the podium by party officials to unknown hiding place while police officers continued discharging teargas. 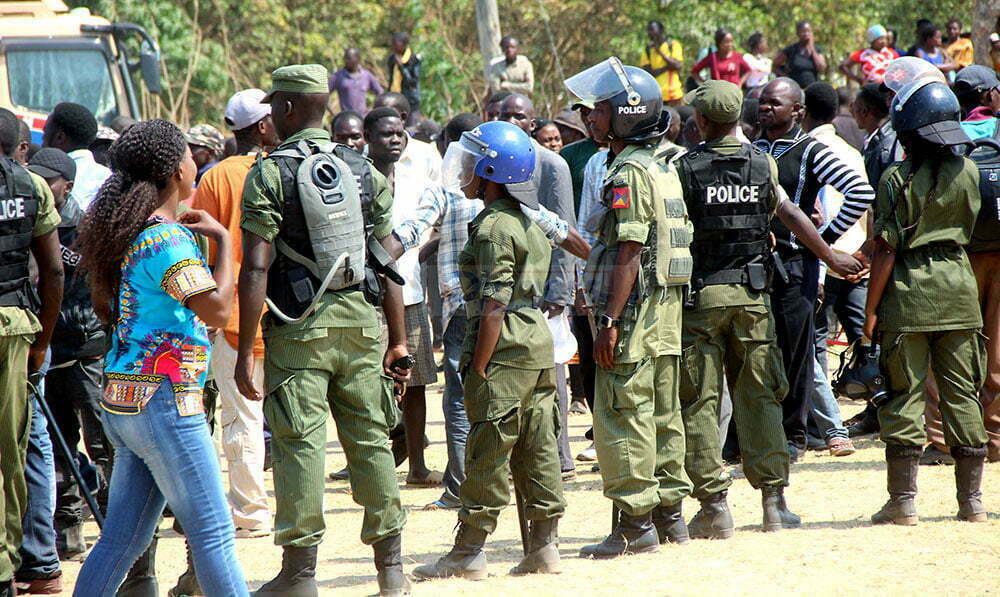 Police force Kalaba out of Mwinilunga

PF scared of me standing, I know too much – Harry

I love Luapula because the people love me, says Lungu

No matter what and how much they do, the people won’t relent, Pf must go. We have had enough already.