Foot and Mouth Disease, Drought and a Harsh Economy: A Triple Tragedy for Livestock Markets and Trade in Zambia

The first quarter of 2019 has not been friendly to the livestock industry in Zambia. This is due to among other things: drought in some areas of Southern, Western, Central, and Lusaka provinces. As if this was not enough, came an outbreak of Foot and Mouth Disease (FMD) in Mbala, then Chisamba and finally Monze District; coupled with a harsh economy. Let us start by looking at the drought situation in Southern Province and its ripple effects on livestock trade, effects of Foot and Mouth Disease outbreak in Southern Province on Livestock Markets, and conclude with some recommendations.

Effects of drought in Southern Province on Livestock Market Disruptions
The highly productive cattle rearing areas of Southern Province practise a pastoral or nomadic cattle-grazing system where farmers graze their animals from the Kafue flats or floodplain in dry seasons and move to upper areas or plateaus during the wet months of the year when these plains become flooded due to heavy rains. However, as of October/November 2018, there were a number of downer cattle (weak and unable to stand) due to poor nutrition even in the Kafue flats (which are supposed to be lacustrine grazing grounds) as the grass had dried up hence of poor quality (Nalubamba K.S, personal communication). This grass has a high content of fibre with fewer nutrients when dry. Farmers were forced to sell the downer cattle (forced liquidity) to abattoirs, which increased the supply of cattle on the market. As you may know that when supply outstrips demand, prices of cattle reduce which is a big blow to the already struggling traditional cattle farmers. Farmers generally sell more cattle around this time to reduce numbers when grazing areas dry up, and our cattle markets thrive on these market trends to fix cattle prices as farmers do not have a say on price setting (see figure 1). Farmers were looking forward to the rainy season so that the fresh and nutritious grasses can grow and heal their livestock from downer syndrome in the grazing areas, alas, the drought set in thereby worsening the situation. This meant that weak and undernourished cattle had to be sold, further saturating the supply market with lower quality downer cattle. The consumer demand for beef also seems to have reduced due to low purchasing power by the middle-income class due to economic hardships. Our livestock markets are generally monopsony (a market structure in which a single buyer substantially controls the market as the major purchaser of goods and services offered by many producers or sellers), meaning that buyers have all the freedom to set price and thrive on trends in producer financial needs. 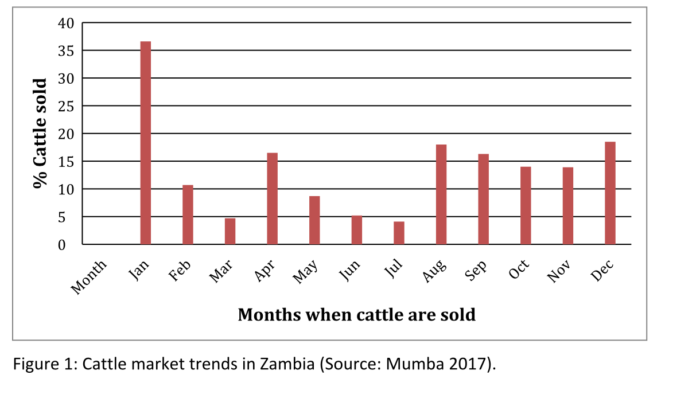 Effects of Foot and Mouth Disease outbreak in Southern Province on Livestock Markets
As if the drought had not disrupted livestock markets enough, there came an outbreak of Foot and Mouth Disease (FMD) in Monze District of Southern Province. How the disease came to Monze East is not a subject matter of this article. Suffice to say that officers entrusted with control of the movement of livestock and farmers ought to strive to do the right thing at all times and understand the intended and unintended consequences of their actions. How does it feel to see severe national economic loss due to market disruptions caused by your actions? Feels like economic sabotage right? Over a million dollars will be used to contain the disease (FMD type O), which you have newly introduced to Southern Province. In countries where they understand the economic value of the livestock industry and guard it jealously, you would risk more than five years imprisonment in addition to losing all your cattle and other in contact animals at the farm.

You may ask how drought and a harsh economy enhance the spread and maintenance of contagious diseases such as Foot and Mouth Disease. Well, as I said earlier, food for animals (grass) has dried up due to drought and farmers are now moving cattle in search for greener pastures, and in so doing also spreading the disease. Let us say, for example, If Foot and Mouth Disease is reported in Monze East, which is mostly a plateau or upland, also dry due to drought, farmers have no choice but to start moving cattle towards Monze West which extends into Kafue flats. With the existing environmental conditions, the FMD viruses are likely to be spread extraordinarily efficiently (dry, windy conditions expected from the tropical cyclone from Mozambique may further exacerbate the situation), including over long distances that stressed animals have to move on hoof, and infect large numbers of animals along the way, over a wide area. Within the Kafue flats, farmers move further towards Namwala and Itezhi-tezhi meaning that you eventually get the disease into Mumbwa, and Lukanga swamps of Kabwe if the cattle in these areas are not vaccinated against FMD type O.
Similarly, if FMD is in Monze East, the disease may spread into Mazabuka, Pemba, Gwembe and other neighbouring districts. You may also ask, why not quickly vaccinate all cattle in Monze and surrounding areas? Does the answer lie in the harsh economy? Do we have the money? When did the same districts that have Foot and Mouth Disease last receive funding for routine operations? Is the Ministry of Fisheries and Livestock receiving the attention it deserves? Is the Veterinary profession that has run for over three years without the regulatory body (Veterinary Council of Zambia) at the NEGLIGENCE of previous and the current Minister, receiving the attention it deserves? Ladies and gentlemen, FMD prevention and control, is an expensive undertaking, and money has to move from another sector to control it hence a high opportunity cost for a struggling economy like ours. “BOMA ilanganepo!”

Now we have a livestock movement ban of live cloven-hoofed animals such as goats, sheep and pigs, meaning that these types of livestock are NOT supposed to move from Southern to Lusaka, Copperbelt and other mining provinces such as North Western, including Kasumbalesa where we get the most consumers with good purchasing power. Note that livestock movement bans always necessitates illegal livestock movements, which further worsen the disease spread to other areas. The Lusaka Urban Small Livestock Market in Chibolya, which is managed by Small Livestock Association of Zambia (SLAZ) complained over the ban stating that 80% of its small livestock come from Southern Province and they cannot access them because of the livestock movement ban. What happens to their business? These are some of the limitations to accessing international livestock markets in the much-desired export diversification agenda.

In conclusion, it is good that a task force has been formed to contain the outbreak, but I would recommend that the government quickly finds money to finance the undertaking, NOT only to vaccinate in Monze District but all the surrounding areas that are at risk due to drought-driven movement dynamics of cattle and their owners in search of greener pastures. The traditional cattle farmers have to be actively engaged to understand how cattle movement affects the spread and maintenance of Foot and Mouth Disease and not only keep such information among stakeholders in the task force.

In the medium to long term, I recommend that farmers be engaged on the need to diversify the risk by not keeping all their wealth in the form of large herds of cattle. It is worth noting that culturally, keeping large cattle herds is more important for social status in Southern Province. This behaviour could be due to a lack of investment opportunities and a lack of a culture of banking and investment. One may argue that, concerning a poor culture of banking among traditional cattle farmers in unstable economies of developing countries, such as Zambia, the value of money is quickly lost through inflation as opposed keeping money through cattle. However, this does not hold under poor husbandry practices where the risk of animal death from disease and under-nutrition is high. Thus, cattle are a source of savings, but an imperfect one, especially in such a triple tragedy case of drought, Foot and Mouth Disease, and a sour economy.

Last but not the least, the meteorological department and SADC Climate Services Centre alerted us about the tropical cyclone with a speed of 176Km/h that affected Central part of Mozambique, Zimbabwe, Botswana, Malawi, Central-east Zambia, and extreme South Democratic Republic of Congo (SADC-CSC, 2018). How did the cyclone affect livestock industry in Zambia? Well, we have an outbreak of Foot and Mouth Disease in Lundazi and Vubwi districts of Eastern Province (https://www.lusakatimes.com/2019/03/26/foot-and-mouth-disease-breaks-out-in-lundazi-and-vubwi-districts-in-eastern-province/), and the outbreak is suspected to have come from Malawi because most of the cases are reported in bordering areas. The cyclone, among other factors has propagated disease spread from these countries to Zambia. In future, veterinarians and stakeholders must be on the alert and be prepared for outbreaks of contagious livestock diseases when alerts of environmental and climatic factors such as tropical cyclone or El Niño that are conducive for disease maintenance and spread are issued. This may entail conducting a risk assessment by closely monitoring recent outbreaks of contagious diseases in neighbouring countries, and if at high risk from, prepare by putting mitigation measures in place.

(The author is a Senior Lecturer of Livestock/Animal Health Economics at the University of Zambia, School of Veterinary Medicine. Email: cmumba@unza.zm, Mobile: +260977717258)