Konkola Copper Mines has decided to downsize its operations owing to the new tax regime which took effect on January 1.

According to a brief issued to all KCM staff today, management stated that it had been left with no choice but to downsize operations at Nchanga Smelter Operations due to low availability of concentrates.

“Management wishes to advise employees and business partners that starting on 4th January, 2019, Banded Sand Stones (BSS) operations at Nchanga Underground Mine (NUG) will be suspended due to low acid availability as a result of rationalized operations at the Nchanga Smelter. Nchanga Smelter Operations will be downsized due to low availability of concentrates. The management was left with no choice but to scale down operations under the circumstances as the introduction of 5% import duty on concentrates has made the smelting of imported concentrates commercially unviable. KCM needs to import concentrates in order to meet smelter capacity and blending requirements,” read the brief.

“The new import duty has an impact on every tonne of copper produced resulting from imported concentrates. The current margins are thin and completely eroded through this impact, resulting in high production costs and operational losses.”

Management stated that areas which would be affected by the downsizing of the smelter included the Tailings Leach Plant (TLP).

“The TLP relies heavily on acid production at the smelter for the treatment of ore from Nchanga Open Pits, Nchanga Underground, Nchanga Stock Piles and Tailings Dams. Regrettably slow production at the TLP will negatively impact on NUG Banded Sand Stones (BSS) Production area, which has high acid consumption during the treatment of BSS in the TLP process plant. In view of this, NUG BSS treatment will be suspended to allowably low Gangue Acid Consumption (GAC) material to be treated at the TLP, while management continues to look at remedial actions,” read the brief.

“During this temporary suspension of NUG’s BSS production, the NUG workforce will be involved in key maintenance activities that will sustain production once the unit resumes full operations at a date to be communicated in due course.”

Below are some anticipated questions and answers from KCM management: 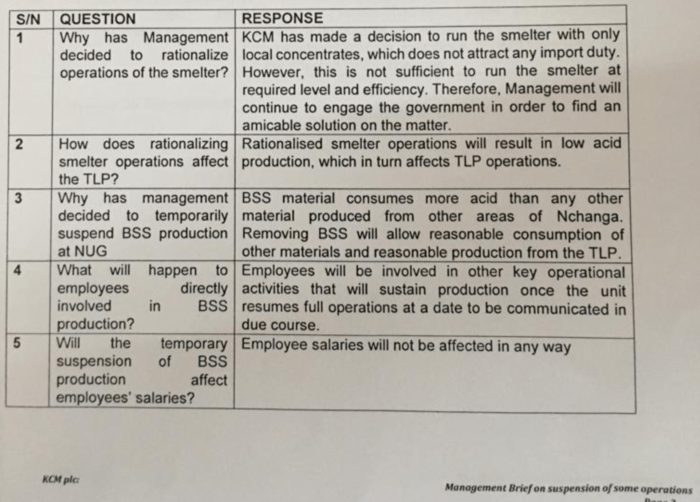 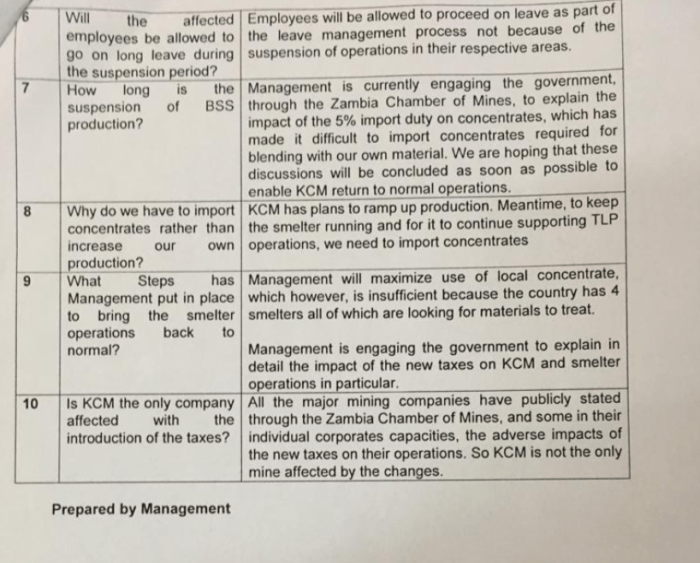 Is Homosexuality a Political Weapon of Choice?

FREEDOM IS NOT FREE – Africa Unity Day: A Day to Rekindle the Dream of the Rebirth of Africa, as a Free Country!

Vedanta says it has settled $203 million KCM debt since liquidation